Dozens of tests were performed over the next several months trying to diagnose the disease. Finally after nearly six months of testing a doctor noticed a similarity with a very rare liver disease called PFIC (progressive familial intrahepatic colistasis). Finally our disease had a name, but the route for treatment was not very promising. The expert on this disease was a Dr. Wittington in Chicago, so we were off to Chicago.

We came to learn that the ‘Progressive’ in PFIC title meant that the liver eventually progresses to failure resulting in death of the individual. Miles was just over one year old when we were given this news, and we were told that without a transplant he would be lucky to live into his teens. He was immediately placed on the Transplant List in the hope a matching liver would be found.

Over the next year and a half many trips were made from our home in Kansas City as Miles was watched closely by the Chicago liver team. He also 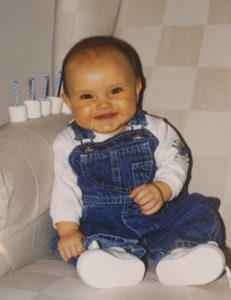 underwent a surgery called a diversion to drain the hazardous bile that was pooling around his liver and slowly killing it. There was a small bag attached to a stent, which required draining twice a day. In some cases this procedure bought years of life for the patient so we felt it necessary.

Another year or so passed for Miles living with his diversion bag, and having countless blood draws to monitor his liver enzymes. Time progressed as we were waiting and hoping for the day when we would get the call telling us that they have found a matching liver for him, but that call never came. Meanwhile his health declined as his liver continually deteriorated.

He was now just over 2 years old, and the doctors told us about the possibility of using a family member or friends liver if we could find one that matched.

Since at the time of transplant I was 35 years old, and Miles was 2 ½ the doctors needed and took only the smaller (left) lobe of my liver. I was a patient at Northwestern Hospital, and Miles was assigned obviously at Children’s Memorial Hospital in Chicago. After a 7 hour surgery on me, my left lobe was placed in an Igloo cooler and driven by ambulance across town to an awaiting team at Children’s. Twelve hours later Miles was taken into ICU for his recovery. 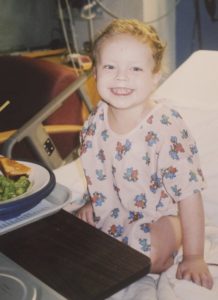 Fast forward another year to the birth of our second son, Aiden. We were told that PFIC is often passed when both parents hold the genes, but they themselves don’t display any signs of the disease. We were also told we would run a 25% chance of PFIC occurring with every child we conceived. Wanting a bigger family and feeling so blessed with Miles we decided to run the risk and Jill became pregnant in the fall of 2000. There are no tests to run in utero for PFIC, so we went into delivery happy and full of hope. Within days of Aiden being born his blood was drawn to get a baseline reading on his liver enzymes, but they came back already elevated so we knew almost immediately that he too was diagnosed with PFIC.

With such an early warning we were hoping to get a jump on the disease. He underwent the diversion procedure just like his brother had on the prayer that if we could divert the hazardous bile away from his liver soon enough the liver would not be harmed thus eliminating the need for a transplant. He was not put on the transplant list hoping things would stabilize since we caught his disease so early.

Aiden did do better, and stayed healthier longer than Miles, and we thought perhaps we were winning this battle until Aiden was about 2 years old his liver health started deteriorating. After talking to the doctors in Chicago we decided to place Aiden on the transplant list as protocol, and to start blood typing friends and family for another living donor transplant. He was placed on the list on a Thursday just three days before Halloween.

Miles, Aiden, mom, and dad all went out trick or treating that night, but had to stop early due to Aiden’s weak condition. We came home, and started going thru the candy. Shortly after getting home the phone rang. It was the transplant team in Chicago telling us that a matching liver had been found for Aiden, and that we needed to get to Chicago immediately. We were ecstatic we knew how long the wait could be, if ever.

We were able to catch the last flight out of Kansas City Airport, arrive in Chicago, and catch a ride from the waiting ambulance to the hospital. We were home for Christmas with healthy livers for all. 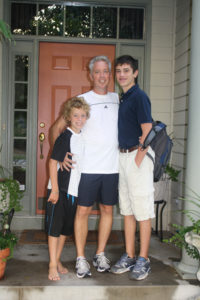 How are they doing now you may ask? Miles is about to turn 14, and has gone thru a recent growth spurt putting him at 6 ft tall. He was also enrolled in a study with about 10 other transplant children who have been weaned off of all post transplant drugs including anti-rejection medication. This study is now in its 6th year, and Miles shows no sign (other than a faded scar) of ever having any health issue at all. He swims competitively, plays basketball on his junior high team, and plays Xbox. Aiden just turned 11, and also shows no signs of any illness either. He swims as well, rides his bike everywhere, and plays basketball non-stop.

As a father I am very blessed to have two healthy sons and I have joined the board of ODTAA to try and help other families be as fortunate. 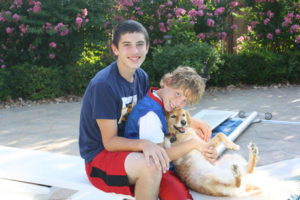 The Organ Donation & Transplant Association of America’s mission is to help people start the conversation about organ donation and to educate about its importance for the more than 100,000 people awaiting transplants. 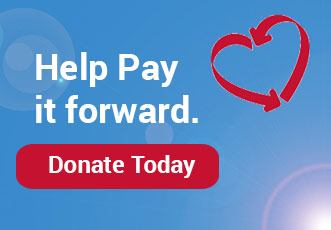